skip to main | skip to sidebar

It felt as if my heart was about to pound its way through my rib cage.   My palms were sweaty, and chills danced up my spine at the realization of what was happening before me.  Time was growing short.   Verrrrry short.

Ask any experienced eclipse chaser, and they'll tell you it's always like this.  "Anxiety," "nervousness," "apprehension"―all are words that describe the emotions one feels as the moon's inky shadow engulfs our sky from the west, and the alien darkness of "totality" descends in mid-day.

But this was not totality.  In fact, we weren't even outdoors.  We were in the airport at Livingstone, Zambia, watching helplessly as our chartered aircraft―scheduled to take us 200-plus miles to the eclipse centerline―sat on the tarmac.   Its GPU was broken and the plane couldn't take off without it.

Now I'm not a pilot, and I don't know a GPU from a BLT.  But I do know that the moon cares nothing about our mundane problems.  It continues on its orbit and, at that very moment, its shadow was careening eastward across the Atlantic―approaching by 25 miles every gut-wrenching minute we sat in Livingstone.  The shadow would arrive in less than four hours and, if we were going to meet it, we had to leave.

But things weren't looking good.  Pilots and technicians were talking and studying the underbelly of the plane―not an encouraging sign.  We were, after all, in the middle of Africa.  How many spare 737 GPUs could there possibly be, and how efficiently could anyone find and install a replacement?

Some in our group of 86 remained outwardly upbeat as thoughts of traveling halfway around the world only to miss the first total solar eclipse of the Third Millennium began to sink in.  Others began to rationalize out loud:  "Well, we could still see the partial phases from here..."

All we could do was wait and watch... and wait some more.  Hope was fading with every tick of the clock.  And then, just as unexpectedly as the delay announcement earlier that morning, the doors from the tarmac swung open.  "OK, everyone onboard!  We're ready to go!"
RACING THE SHADOW
What a flood of emotions now!  As we gathered our gear and raced toward the plane, many among us were performing mental arithmetic.   "If we leave in 10 minutes... if the flight takes 45 minutes and the bus ride to the site takes only 30 minutes..."

That they fixed our plane was stunning.  That our bus squealed to a stop at our pre-selected observing site with barely five minutes until "first-contact" was nothing short of a miracle.

My arms overflowing with photo gear, I leaped from the bus and sprinted frantically across a tick-infested field―being chased by our guide spraying me with a can of insecticide―in search of an appropriate foreground.  Only four minutes remained until my first carefully planned shot was scheduled.  Miss it, and I'd have to wait 18 months for another chance.

I quickly found a spot just to the east of a small tree, cleared some of the tall, dry grass, set up the tripods and aligned the cameras, checked and tested the automatic programming, and―muttering something off-color about Murphy―pressed the start button.  Right on time!

Finally, I could take a breath.  Sure, I had a few more gray hairs on my head but, in a crystal clear sky, the show had begun.  And, this is why we were here!
GREATEST SHOW ON EARTH 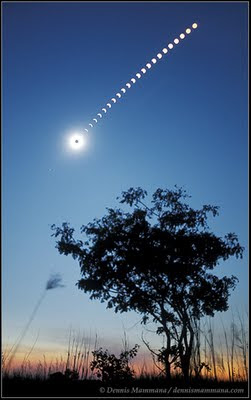 Within the hour, the moon's umbral shadow arrived―just as expected―and it engulfed the Zambian landscape in a still and eerie darkness.  Soon, the last burst of sunlight disappeared behind the moon's edge―the "diamond ring."

The place where the mighty sun once shone was a void, around which our star's gossamer corona streamed outward across the sapphire sky.  Some cheered its appearance;  others wept at its splendor.  And some gazed in silent awe at the most glorious spectacle nature has to offer.
Three minutes and 35 seconds passed―yet it seemed like only seconds―until the sun's familiar rays burst into view again.  "No!  It can't be over yet!  It just began!"   But the moon's shadow continued its eastward journey―across southeastern Africa, across the Mozambique Channel, and on to Madagascar where other sky watchers anxiously awaited its arrival.

Three years of calculating, planning and rehearsing were now complete.  For a few magical moments we had become one with the Cosmos―in perfect syzygy with the three most important bodies in the heavens.  We had been touched by the power of the universe in ways difficult to describe, and we had felt emotions impossible to communicate.

Boy did we ever!

Dennis Mammana
Borrego Springs, CA, United States
As an astronomer for more than four decades, Dennis is not only a syndicated columnist and popular lecturer, he is also an invited member of TWAN (The World at Night), an international team of the most highly acclaimed night sky photographers on the planet.